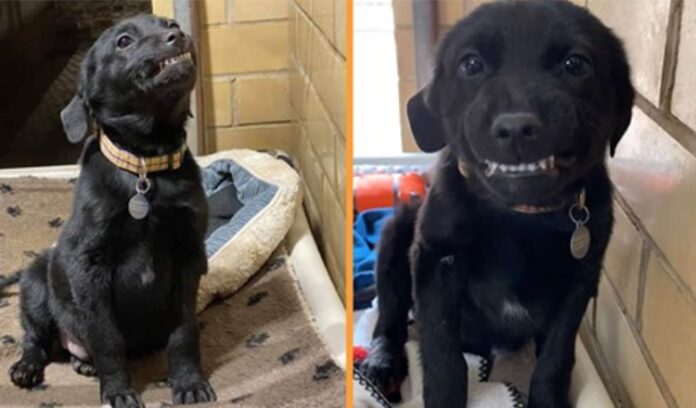 Meet Burreaux, an adorable black labrador puppy who tried his best to smile at everyone who walked past the kennel in the hopes of getting adopted, writes kingdomstv.

One day, after walking past a local animal control center, Courtney Wingate, who is the director of the Humane Society of Northwest Louisiana, spotted the trio of pups and knew she couldn’t leave them behind.

She took in all three pups, but it was Burreaux’s charming smile that caught her eye.

So Courtney called volunteer Sarrah Walton who came and rescued the puppies before naming them after 3 Louisiana State University Football players.

The trio were taken straight to the vet for routine checkups, and all seemed positive. Yet when they got back to the rescue center, Burreaux fell ill.

They immediately took him back to the animal hospital who treated him and helped him to make a full recovery.

After the trio were back at the rescue shelter, Sarrah began to notice that Burreaux would crack a wide smile every time someone spoke to him in a high pitched voice.

Whenever someone would call him a good boy, he would flash his tiny teeth in a huge grin. Speaking to The Dodo Sarrah said:

“It’s whenever you’re talking real sweet to him … he gets this smile like he wants something. [It’s] like he’s telling you, ‘Come pet me, come love me.’”

Once they pups were ready for adoption, the rescue decided that sharing their special talents on social media would be the best way to find them a forever home.

Joe was a natural playing fetch, he was quickly adopted after sharing a video of his skills.

For Berreuax, staff at the shelter decided to share a video of him flashing his huge adorable smile to show off his sweet nature.

[W]e were thinking, ‘Burreaux wants a home so bad that he’s always smiling, trying to cute it up’. So we took that video.

You can watch the adorable video below:

It was a hit! He went viral with over 1 million views and managed to find himself a forever home!

Tiny Puppy Chases Cop After Being Abandoned, And Begs Him To Take Him Home